One hundred years ago, on the eleventh hour, of the eleventh day, of the eleventh month, four years of some of the most destructive fighting the world had ever seen finally came to an end. Every year, on 11th November, countries in Europe remember the signing of The Armistice which denoted the end of World War 1. To this day, it remains one of the deadliest conflicts in history, which saw approximately 37 million civilians and soldiers killed. If you look back through your family tree, you’ll no doubt find ancestors who lost their lives tragically fighting for their country. 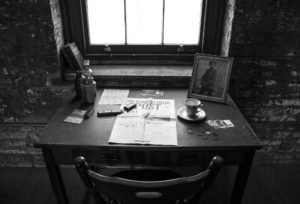 Nowadays, we can look back on this time with a sense of mourning, but also with the knowledge that hopefully a war so brutal and senseless will never be fought again. However, at the time, poets and writers were split between this view, and advertising the patriotic view that all men should fight for their country. Here is a poem from Jessie Pope. Pope was notorious for use guilt and persuasion to encourage men to enlist with the army. If you didn’t, you were considered a coward. Her most famous poem is below. Can you spot any techniques that might convince a nervous young man to join the army?

Who’s For The Game?

Who’s for the game, the biggest that’s played,
The red crashing game of a fight?
Who’ll grip and tackle the job unafraid?
And who thinks he’d rather sit tight?
Who’ll toe the line for the signal to ‘Go!’?
Who’ll give his country a hand?
Who wants a turn to himself in the show?
And who wants a seat in the stand?
Who knows it won’t be a picnic – not much-
Yet eagerly shoulders a gun?
Who would much rather come back with a crutch
Than lie low and be out of the fun?
Come along, lads –
But you’ll come on all right –
For there’s only one course to pursue,
Your country is up to her neck in a fight,
And she’s looking and calling for you. 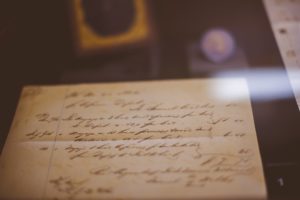 Thankfully, most of the poets and writers who glorified war have not been remembered much. The most famous British poet to come out of WW1 was arguably Wilfred Owen. His story is tragic. He joined the army at 22 years old and fought valiantly until he was diagnosed with shellshock (a psychological disorder now known as Post-Traumatic Stress Disorder) after seeing his friend die violently in battle. He was sent back to England for treatment, but the moment he was discharged, headed straight back to France. He fought bravely for three years, but was sadly killed in action just one week before the war ended. His parents received the telegram about his death on 11th November. Owen’s poetry discusses the cruel life he had fighting in the trenches and the horrors of gas and other weapons he faced. One of his most famous poems is below. Can you spot any differences in tone from Pope’s poem?

Bent double, like old beggars under sacks,
Knock-kneed, coughing like hags, we cursed through sludge,
Till on the haunting flares we turned our backs,
And towards our distant rest began to trudge.
Men marched asleep. Many had lost their boots,
But limped on, blood-shod. All went lame; all blind;
Drunk with fatigue; deaf even to the hoots
Of gas-shells dropping softly behind.

Gas! GAS! Quick, boys!—An ecstasy of fumbling
Fitting the clumsy helmets just in time,
But someone still was yelling out and stumbling
And flound’ring like a man in fire or lime.—
Dim through the misty panes and thick green light,
As under a green sea, I saw him drowning.

In all my dreams before my helpless sight,
He plunges at me, guttering, choking, drowning.

If in some smothering dreams, you too could pace
Behind the wagon that we flung him in,
And watch the white eyes writhing in his face,
His hanging face, like a devil’s sick of sin;
If you could hear, at every jolt, the blood
Come gargling from the froth-corrupted lungs,
Obscene as cancer, bitter as the cud
Of vile, incurable sores on innocent tongues,—
My friend, you would not tell with such high zest
To children ardent for some desperate glory,
The old Lie: Dulce et decorum est

If you’d like to read more literature from World War 1, or books set in this time period, there are some recommendations below: